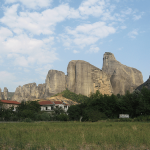 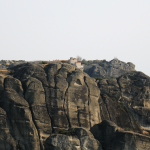 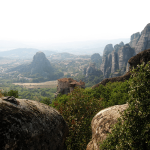 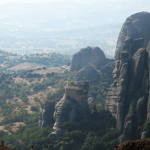 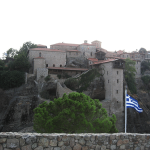 Meteora is a magical place to visit. We personally have been there and we are amazed of the atmosphere, it can not be described it has to be explored by yourself. It’s an incredibly beautiful and tranquil place. These huge mountains that stand out from nowhere and do not fit into the rest of the landscape, its magic. In addition, there is a monastery built into the mountains, which is still in use today. How they built these are a mystery itself.

To enter the monasteries you should wear long pants / longer skirts and cover your shoulders. You can usually borrow clothes if you do not have your own. Its easy if you come by car to drive a up to the top. You should keep in mind whether you have small children to keep a close eye to them, there are no rails that protect.

The place is unique in its kind and now also one of the worlds protected by Unesco!

Meteora consists of a number of gray-black, sugar-top-shaped sandstone cliffs similar to start-up moon rakes. How the strange rocks have formed have been speculated for a long time, but still the rocks in Meteora are a geological riddle. An even bigger mystery is how they build 22 monasteries on the cliff tops. They are soft with big cracks and some of them full of holes.

The monasteries were built here just because the area is lonely, there is a breathless peacefulness and very few did know about the place and the high cliffs lay closer to God. An ultimate place for those who wanted to retreat to live an ascetic life in solitude with prayer and meditation. The eremites were the first inhabitants of Meteora. In the 13th century, the monk Athanasios made the first monastery here, giving it the name Meteora (in the air) because he believed that the rock was a connecting link between sky and earth. The monastery was built on the highest cliff 613 meters above sea level and 413 meters above ground level.

How the magnificent, great monasteries were built was not cleared. There are several theories, one of which is that people took up a little bit at a time and built a little here and a little bit there, to finally reach the top. Many people think that they cut out shells in the rock from which building materials were hoisted up in turns. Another much funeral theory states that paper dragons were used to fly climbing repairs. Of the 22 monasteries once in Meteora, six are in operation today.

We visited the monastery Megalo Meteora (Great Meteora) and the monastery of Agios Stefanos. It is possible to visit all six on their own, but we strongly recommend a guided tour to answer all your questions.